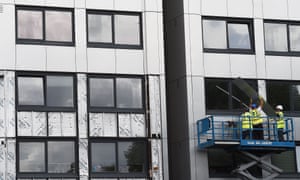 Progress to fix apartment blocks clad with dangerous combustible panelling is so slow it will take another five years to complete at current rates, according to government figures released on Thursday.

Across England, tens of thousands of people are still living in 354 high-rise residential buildings that require their wall systems to be stripped off in the wake of the Grenfell Tower fire, which claimed 72 lives. In January, work began on just one of the affected buildings and over the last two months work is only being completed at the rate of six buildings a month.

Ministers have released £400m to help pay for work on social housing blocks and 41 of the 158 found with dangerous aluminium composite cladding have already been fixed. But the owners of 173 private towers have been far slower to act and have largely ignored government threats to intervene unless they pay for the works, which can typically cost in the region of £5m to £10m per building. Only 10 private buildings have so far been fixed, 21 months after the disaster, despite their cladding being deemed an illegal fire risk.

Leaseholders in privately owned high-rise buildings in Bromley, Manchester and Salford are among thousands of people who have been in dispute with freeholders over who should pay. It has made some residents sick with stress-related illnesses. Property tribunals have ruled that leaseholders rather than freeholders should pay, which has left some facing financial ruin, with bills of up to £80,000 per flat. The housing secretary, James Brokenshire, said that building owners and developers would face action unless they paid and has told councils to step in and carry out works and recoup the costs. However, councils have said they do not have the powers to do that and that financial backing has not been made available.

Last week, residents of Vallea Court and Cypress Place in Manchester secured an agreement from the buildings’ owner and developer to pay an estimated £5m bill to replace their combustible cladding after a long battle. They were each facing a bill of about £20,000.

But the otherwise slow progress has angered the bereaved and survivors of the disaster. Natasha Elcock, the chairwoman of Grenfell United, which represents them, said it was “a travesty” that thousands of people remained in dangerous homes.

“How much longer do we have to keep lobbying and talking about this?” she asked. “We want change, and change will mean making people safe in their homes. The fear is that more lives could be lost. I don’t ever want to wake up in the morning and find out a second Grenfell has happened.”

The latest figures on progress compounded survivors’ frustration after police said on Wednesday that any criminal charges could not be considered until the end of 2021 at the earliest, four years after the disaster.

Last November, Brokenshire told parliament that “private building owners must pay for this work now or they should expect to pay more later”. But they are not responding quickly.

The latest statistics show none of the 31 high-rise hotels with combustible cladding have yet been fixed. Of the private blocks, 69 have no remediation plans in place.

Labour’s Sarah Jones, the shadow housing minister, said: “Yet again we are faced with the reality of this government’s reckless approach to fire safety in tower blocks. Almost two years on from the Grenfell tragedy, more than eight out of 10 blocks with deadly Grenfell-style cladding are still draped in it. The news today that families of Grenfell victims must wait until 2021 for justice simply adds to the feeling that focus has slipped from this crucial issue.”

The Ministry of Housing, Communities and Local Government has been contacted for comment.