If you have ever been in a relationship, you know that shopping with your partner isn’t a cake walk. Either of the two gets impatient at some point, and it has been shown to us in the popular culture how guys are generally the ones who get paranoid when their ladylove is on a shopping spree. However, there are many gentlemen boyfriends who break such rules, and one such celebrity is Hina Khan’s long-time beau, Rocky Jaiswal. The two have been together for quite some time now and it was on Bigg Boss 11 that their relationship went public.

Rocky Jaiswal had proposed to Hina Khan inside the BB11 house. In an interview last year in 2018, when Hina was asked as to how she felt about the same, the Yeh Rishta Kya Kehlata Hai fame actress had shared, “It was a kinda sweet surprise for me as well. I wasn’t prepared for it and neither was it planned. It just happened. I usually don’t talk about my personal life but over there, you become so overwhelmed. The moment I saw him I could not control myself and when he kind of, it was not a proposal, we were in love before as well but the way he said it, I could not hold back and said it back, I love you too. It was sweet. I will always remember and cherish that moment.” Coming back to the lovebirds, it seems that Hina Khan’s beau, Rocky Jaiswal was on a shopping spree in London for his ladylove. Rocky did not only shop a lot ‘for’ Hina but apparently has also sent the gifts across to Mumbai. And that’s rare, isn’t it? Acknowledging the same, Hina Khan took to her Instagram stories and shared the following picture, atop which she wrote, “My favourite waffle, ya m super excited as @rockyj1 has only been shopping for me in London Thank you for being so patient in the store ‘RO’.” Take a look: 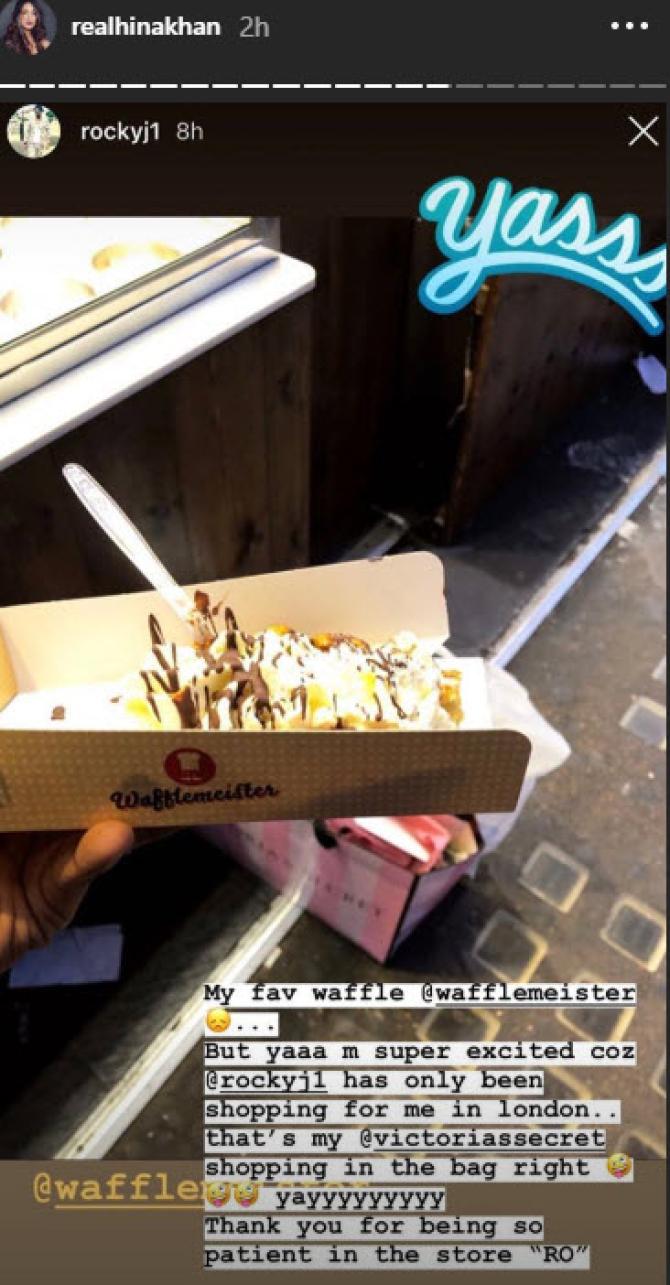 Rocky Jaiswal had recently shared with a media portal about their love story. He had revealed, “We met on the sets of Yeh Rishta Kya Kehlata Hai for the first time where I was the supervising producer and she was playing the lead role. That’s how we met. As for what attracted me to her was her dedication to her work. I have seen a lot of actors, but she is one of the smartest of the lot. It is almost unreal if you find a person who’s so honest all the time. She calls a spade a spade every single time. And that’s the most important thing I love about her. Besides, she is the prettiest woman in the world.” We all have been waiting for Hina and Rocky to announce their wedding date. Commenting on their marriage plans, Hina had shared last year, “No, not at all. If anything happens, it will be marriage which I’ve already said won’t happen any time before 3 years. I don’t understand why they can’t do without making news that includes me. This is nonsense.” Rocky Jaiswal shopping for Hina Khan and being patient in the store is definitely making you dream about your partner, right? Share your views!