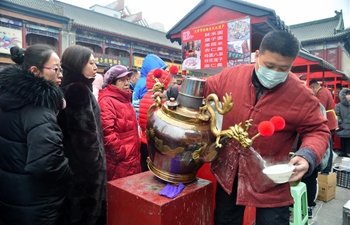 cSHANGHAI,  (Xinhua) — Making a big purchase ahead of the Lunar New Year can be a lot of fuss. But as markets go smart, shopping has become a pleasure, even during the busiest time of the year.

At a Carrefour supermarket “Le Marche” in Shanghai’s Changning District, customers can choose from several payment measures instead of queuing in a long line at the checkout counter.

There are smart machines where customers can scan barcodes on groceries in front of a screen and pay through a WeChat mini-app on their smartphones.

Smart payment has improved shopping efficiency, especially during shopping seasons, according to the supermarket manager.

“The penetration rate of mobile payment in Carrefour stores in China has surpassed 50 percent, and the rate of smart cashiers has reached 38 percent,” said Nathalie Yu, vice president of Carrefour China.

Carrefour has worked with China’s Internet companies such as Meituan, JD and Ele.me on its digitalization of retail service and logistics. Customers can also go to the Carrefour online supermarket and receive orders at home within hours.

The U.S. retail giant Walmart has also sped up its “smart revolution” in the Chinese market, with over 400 outlets supporting “Scan and Go.” It has also introduced an online search map of groceries to improve shopping efficiency.

As of June 2018, there were 802 million Internet users in China, 788 million of whom were mobile users. Over 569 million Chinese shopped online at least once and 557 million used their mobile phones for shopping.

In a Sam’s club outlet under Walmart in Shanghai’s Pudong District, an interactive area showcasing daily products gets a “facelift” every week. Just before the Lunar New Year, the area was transformed into a children’s bedroom, which attracted children and their parents to take a rest.

According to Chen Zhiyu, a senior vice president of Walmart China, it is a trend that many groceries are going online, yet people still go to supermarkets to enjoy family get-together time and explore new products.

In “Le Marche,” 78 percent of the display area is food, with imported food taking a considerable part of the shelves. Customers can have their fresh seafood cooked to dine in the supermarket.

“We will promote more ‘Le Marche’ in other Chinese cities,” said Thierry Garnier, executive director of Carrefour Asia, adding that industry peers and partners from more than 10 countries had come to Shanghai to learn from such innovation.