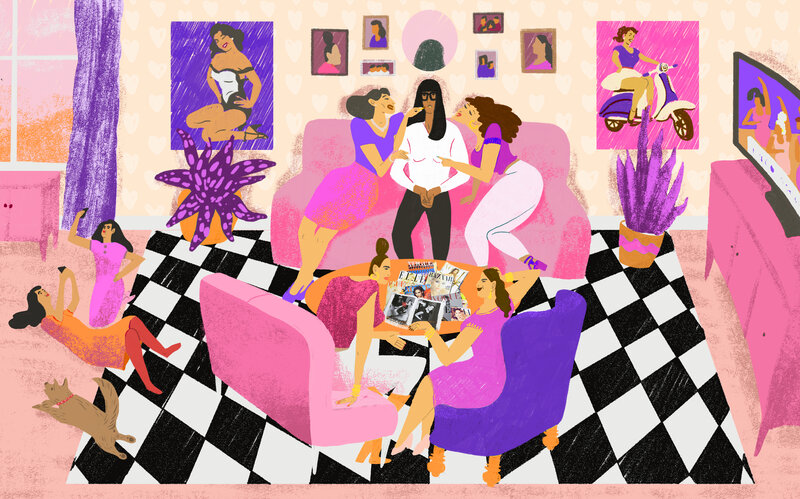 Quick — think of the most beautiful person you know. Is it your partner? Your mother? Rihanna? (Wait, you know Rihanna? That’s amazing!)

There are a million different reasons we find certain people beautiful. But there’s no denying that a lot of current beauty standards in the U.S. are based on a particular type of beauty — one that centers a type of white femininity that’s only accessible to a select few.

So this week on Ask Code Switch, we’re answering a question from Cecilia Fernandez, of Ann Arbor, Mich. She tweeted at us to ask: “Besides the natural hair movement, what other ways have women of color gone to decolonize their beauty routine?”

Cecilia — this is a really great question. As someone who spent years flat-ironing my curls and suffering through orthodontia — I was also quite curious about this.

So to begin, let’s talk about what it means when we say our notions of beauty are “colonized.”

Think about why that person is beautiful. Is it because of their perfectly white teeth? Their thick, shiny hair? The fact that their features conform perfectly to Western beauty norms?

To begin with, a lot of current Western beauty standards celebrate whiteness — not some objective, biological, evolutionary thing, but literally just being a white person. In fact, if you go back and look at the work of some early racial theorists — people like Christoph Meiners and Johann Blumenbach — they defined the category of “white,” or “Caucasian,” as being the most beautiful of the races.

“It was important for [those racial theorists] to be superior in all areas,” says Nell Irvin Painter, an artist and historian who wrote The History Of White People. She says the group of academics who first created these racial categories were white supremacists, so, “they not only wanted the people they called ‘their women’ to be the most beautiful, and ‘their men’ to be the most virile. They wanted ‘their countries’ to have the best politics. So they wanted to have everything better. And that included beauty.”

That association between beauty and whiteness has proven hard to shake. There’s a reason that so many people still think of an “all-American beauty” as a thin, blonde, blue-eyed white woman. It wasn’t until 1970 that a woman of color was allowed to enter the Miss America pageant. Before that, the official rules stated that contestants had to be “of good health and of the white race.”

Decisions about who society holds up as beautiful also have a lot to do with class. Nell Irvin Painter notes that a lot of the things we consider beautiful are actually just proxies for wealth. Think of how much it costs to get cosmetic surgery, or braces, or even a facial.

(It’s worth noting that there’s a fair amount of overlap between beauty routines and health or grooming routines. People brush their teeth to prevent cavities, sure, but so many toothpastes also have whitening products. And you could be blowdrying your hair to get it dry, or to make sure it’s shiny and voluminous. In this context, we’re thinking of the purely aesthetic parts of a routine — not ones that have to do with health, functionality or hygiene.)

So, how do you push back against all that? A lot people talk about the importance of buying makeup or fashion designed by women of color. But throughout history, a lot of the most effective movements have been about expanding our ideas of what it means to be beautiful.

Let’s come back to the natural hair movement for a moment. That came out of the broader Black is Beautiful movement in the 1960s and 70s. That movement — which came in the midst of the broader Black Power and civil rights movements — was about affirming aspects of blackness that had been considered ugly by white, colonial standards. Organizers of the movement started to embrace the political power behind the idea that all aspects of blackness were beautiful.

Nell Painter says the movement had a huge effect on both her and her family. She says she didn’t start to think of herself as beautiful until she was in her thirties, around the time “black is beautiful” sprung up. A similar thing happened to her mother, who was born in 1917:

“My mother was very beautiful. But my mother was dark-skinned, so she never thought of herself as beautiful. … For black people, the idea of black as beautiful, that was a real breakthrough. And so my mother emerged as a beautiful person, and people told her she was beautiful, and it took her a long time to accept that. I don’t know if she ever really did.”

There are other movements that have tried to address beauty as a political force. There was the indigenismo movement in Mexico. One of its icons was the artist Frida Kahlo. In her self-portraits, she painted herself dressed in pre-Columbian clothes and hairstyles, with visible facial hair and hair between her eyebrows. Many have described those artistic choices as being a radical rejection of white, colonial beauty standards.

And these days, a lot of women push back on the idea that they should remove facial and body hair in order to be considered beautiful or hygienic or professional. The activist and model Harnaam Kaur has spoken about how her life changed once she decided to stop shaving her beard: “I feel a lot stronger and liberated to be who I am and accept who I am freely. … I’m here as a woman who’s wearing something that’s supposed to be — in quotations “supposed to be” — a man’s feature.”

The body positivity movement and the fat-acceptance movements have also consistently pushed back on the idea that thin, young, white, able-bodied women are the epitome of beauty — or that beauty should be a precondition for respect to begin with.

One thing to keep in mind is that beauty is a facet of power. Being considered beautiful can help you gain access to certain spaces, or increase your power in certain settings. By the same token, a perceived lack of beauty, or a refusal or inability to conform to certain beauty standards, also has really tangible consequences.

Noliwe Rooks is a professor at Cornell University who teaches about the politics of race and beauty. She says that women are placed in different categories depending on “how they appear in the world,” and that attempts to decolonize one’s beauty routine often lead to pushback from the outside world — especially for black and brown people. She cited Hampton University in Virginia, as an example. The historically black institution made news in 2012 for a policy in the business school that said male students couldn’t have dreadlocks, because they were considered unprofessional.

Rooks says, “If you’re someone who feels like for body positivity and self affirmation, and adornment, this is what I’m going to do, ‘I want dreadlocks’ — yes you can do that. You can decolonize that look in the way that you feel is important to you. But you can’t go to that school like it. … Until recently you couldn’t serve in the military. … There’s all manner of corporate jobs that if you’re decolonizing your body you can’t have.”

Keep in mind, Rooks says, that fighting against beauty norms is probably going to be really hard. Obese women, old women, queer women, women of color and all the intersections get particularly scrutinized, even when they’re trying to conform to beauty norms — let alone when they push back against them. “We can live in a world where we try to do battle with those overarching narratives,” Rooks adds. “But the forces pushing back against it in many parts of the world — it’s quite a headwind.”

When we’re talking about personal beauty, having a beauty routine at all means that you are, consciously or unconsciously, accepting the idea that you need to change. The way your hair falls or the shininess of your skin or the curl of your eyelashes — it will be more beautiful if you spend time and money to make it different.

So back to the question at hand: How do you decolonize the idea that your natural self isn’t adequate?

You could argue that a profound way to decolonize your beauty routine would be to have none, and simply say, “My body and face and are valuable and beautiful without modification.”

The other really radical thing could be to try reject personal beauty as a measure of worth. Many have argued that beauty should not be a prerequisite, as it so often is, for being treated with respect, kindness or personal autonomy.

Any way you go about it, the process of decolonizing your beauty routine is probably going to result in a lot of people being uncomfortable with your appearance. It’s also the only way beauty norms have a chance of changing. So you have to know your politics. What are you trying to say with your beauty routine? And what ugly truths are you willing to deal with?